September 21, 2015 Illinois Comments Off on Free speech petitioners told they’ll be ‘locked up’ at DuPage 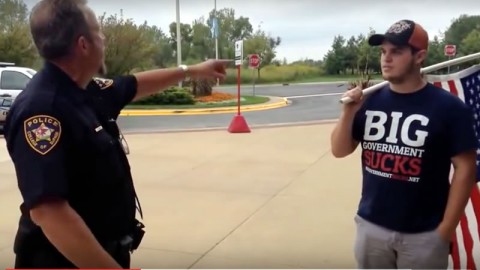 Several students at the College of DuPage were told to cease or be “locked up” Friday as they attempted to collect signatures for a petition urging the school to improve its free speech policies.

The two students, along with an advisor from Turning Point USA who was helping them organize a chapter at DuPage, were on campus inviting passersby to sign up for the club and/or sign the petition—and were also distributing pocket Constitutions and non-partisan flyers stating the “America is a free speech zone”—when they were approached by campus police.

“You can’t do it out here, otherwise I’m going to have to lock you up.”

Joseph Enders, a student at the college, told Campus Reform that he has been attempting to start a TPUSA club for some time, but has had difficulty meeting the school’s requirements for an official student organization. For its part, the College recounts instructing him on the process for starting a new club, but says it has never received the necessary documents from him.

“I’ve had some problems starting the club,” he said. “They told us that we need three members and a full-time faculty advisor, but they wouldn’t let us clipboard.” Enders also claims he has had difficulty finding a willing faculty advisor, primarily due to the need for a full-time advisor, and called the political science department “very liberal.”

Most of Friday’s altercation was caught on video and shared with Campus Reform. The video begins with the conversation already in progress, as the group is questioning the officer about why they are not allowed to do what they are doing.

Enders asks the officer, “[w]hat are the rules for doing this kind of stuff on campus?”

“You go to the Student Life office, and they give you a permit to do so,” the officer replies.

“Yeah, because you can’t have everybody out here doing this,” the officer tells him. “Otherwise you’d have stuff lined up all along here, everybody having a different view and a different point, so you can’t do that.”

Kara Hamilton, the TPUSA representative, then presses the point, asking, “So, like, free speech …?”

“It’s not free speech, ma’am,” the officer informs her. “Nobody’s stopping you from free speech, but you can’t solicit out here, and basically you are—you’re soliciting your opinions. Okay? And you need to go get a permit.”

“Is it a commodity in any way?” Enders interjects. “Is speech a commodity?”

“Well, you’re handing out pamphlets and stuff like that, so that’s exactly what it would mean,” the officer responds.

When asked for more info about the permit process, the officer then appears to become somewhat exasperated, and exclaims, “[w]hy don’t you go talk to Student Life? But you can’t do it out here, otherwise I’m going to have to lock you up. I don’t want it to come to that; like I said, I want you to go in to Student Life.”

The discussion then turns to the exact nature of the violation, as the group wonders if all or just part of their activity was causing problems, and when the officer mentions that they were distributing literature, a student bystander remarks, “I asked for it, though.”

“They’re soliciting it,” the officer corrects him. “I mean, you approached them because they were here doing it. If they weren’t here, you wouldn’t have approached them.”

The group prepared to concede the dispute and take the issue up with the Student Life office, located in the adjacent building. The video ends at that point, but multiple eyewitnesses have told Campus Reform that the altercation did not.

“One student [Enders] was holding an American flag and when they were going to leave and go inside the officer told him that he could not bring the flag into the school,” said Mason Zeri, one of two students who had stopped to sign the group’s petition when the officer approached.

“The students asked why they couldn’t bring an American flag into the school and the officer gave them no response and just ignored them purposely,” Zeri said. “The officer acted very rude in general. The students were not giving him any attitude and he really had no reason to be rude, the students were complying completely.”

The other student bystander, Daniel Sackleh, confirmed Zeri’s account, adding that the flag issue had come up after the officer told the students they could not bring their signs with them into the building.

Enders remained incensed about the incident Friday evening, particularly with regard to the officer’s claim that the group was soliciting opinions.

The College of DuPage’s policies on facilities usage state that “Access to the College’s facilities is a privilege granted by the College,” and outline requirements consistent with many of the officer’s assertions, but throughout the policy manual, the only instances in which the words “solicit” or “solicitation” appear is in reference to the solicitation of gifts and/or donations by faculty.

Spokespersons for the College of DuPage did not respond to Campus Reform by press time, but Enders offered his appraisal in no uncertain terms.

“You can’t solicit an opinion,” he remarked forcefully. “An opinion is speech.”