All Elgin, IL U-46 School Board Members named as suspects in crime

October 20, 2015 Elgin Comments Off on All Elgin, IL U-46 School Board Members named as suspects in crime 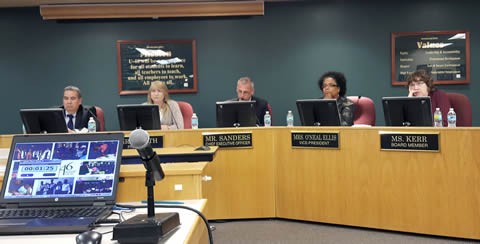 All members of the U-46 School Board in Elgin, Illinois have been named as suspects in the alleged crime(s) of violations of the Open Meetings Act, more specifically, conducting meetings without proper posting of agendas and without allowing for public comment as required under the Act. These are Class C misdemeanors, according to Section 4 of the Open Meetings Act.

We drove for four hours in order to talk for three minutes during the public comment portion required in all public meetings, only to be told that we would not be allowed to speak. 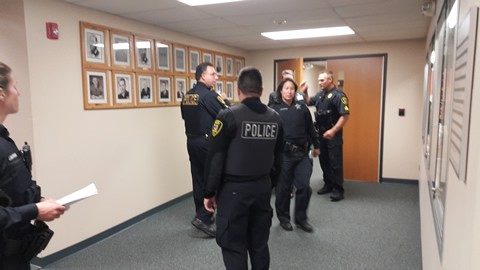 The Elgin Police Department was called by us and arrived shortly after the call. There were half a dozen officers there at one time, and eventually a call was made to the Kane County State’s Attorney, who after research, advised the PD to complete a criminal report naming the board members  as suspects, and forwarding it to his office. This process took over 2 hours to complete.

Section 2.06 (g) of the Illinois Open Meetings Act makes public comment a right, at all public meetings (with reasonable rules).

The U-46 School Board held three meetings yesterday, October 19, 2015. The first meeting started at 4 p.m. and consisted of a finance committee meeting with the meeting notice posted, but no posted agenda at the building that we could see. This meeting included public comment time.

The second meeting, called for the purpose of a closed session for student discipline and other things started at 5:15 p.m. There was a notice posted, but no agenda. There was also no public comment session, in violation of law. All closed meetings must be called from an open meeting – and return to open meeting after the closed portion. No exceptions.

The third meeting started at 7 p.m. and had its meeting notice and agenda posted with a public comment session.

All agendas were on the school’s website, but only the 7 p.m. meeting was posted at the school building.

The issues with these meetings

Section 4 of the Open Meetings Act lists the penalties for violations of this Act, and list them as Class C Misdemeanors – with strong language indicating the legislative intent: “Any person violating any of the provisions of this Act … shall be guilty of a Class C misdemeanor”

At the start of the 7 p.m. meeting, the school attorney lied to the public by claiming there was confusion with a couple members of the audience, and that there was actually only one meeting, not the three meetings that were scheduled with three separate agendas and there separate starting times. He was wrong. There were three meetings.

The school’s Chief Legal Officer (who needs to be fired for being a party to this crime) is attorney Miguel A. Rodriguez.

We will publish more on this as the situation unfolds and after we receive a copy of the police reports.

Tags U-46 School Board