Bastard Son of a Thousand Fathers – Official Trailer from 4 Features/Driven Entertainment on Vimeo. 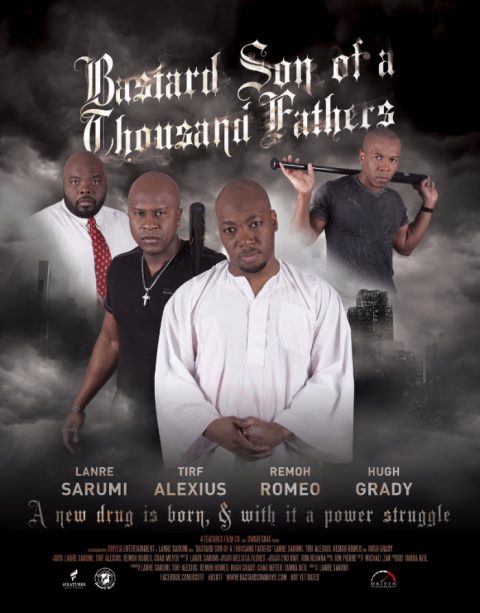 CHICAGO, IL – Chicago’s top independent film company 4 Features Film, has just announced the upcoming theatrical release of their new feature film Bastard Son of a Thousand Fathers. 4 Features Film is a full service production company that is known for their high quality independent films and also their television commercials which has won them multiple Telly Awards.

Their latest project Bastard Son of a Thousand Fathers has already created a big buzz with their loyal followers and mainstream media. The film is written and directed by Lanre Sarumi and the main characters and executive producers are world renowned movie makers Remoh Romeo and Tirf Alexius.

The seventy eight minute crime thriller tells the story of a ruthless immigrant’s persistent quest for power and fame which leads to the development of a new addictive drug that allows the user to reach an ultimate high while still remaining a productive member of society. Just as he’s starting to cash in on his invention, a blackmailing kingpin threatens to take it all away. This fast-paced action packed thriller is filled with cliffhangers and laced with twists, turns, and the bodies of everyone who gets in the way.

The movie is the brainchild of Chicago filmmakers Remoh Romeo and Tirf Alexius who worked on the script for several months before beginning production. “It tells the real life decisions some people are faced with when they have limited options”, says Romeo. “We wanted to give an accurate portrayal of how life can be for immigrants in some of America’s toughest neighborhoods” adds Alexius.

Bastard Son of a Thousand Fathers has a nationwide theatrical trailer and is slated to be released in select movie theaters in Chicago on September 16 and in Los Angeles and New York City September 23. After the theatrical release the film will be released around the world on every major on-demand format. For more on Bastard Son of a Thousand Fathers visit www.BastardSonMovie.com