July 20, 2012 Sponsored Comments Off on ‘Dark Knight’ Shooting To Be Exploited For Political Grist 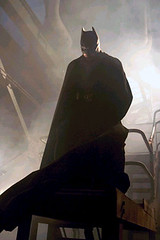 Within hours of the tragic shooting in Aurora, Colorado at a screening of the new Batman movie, the political machine is already gearing up to exploit the incident as a tool to demonize the second amendment and characterize Americans who are against big government as extremists.

A 6ft tall man dressed in black body armor and wearing a gas mask burst through an emergency exit door at the theater during a midnight screening of ‘The Dark Knight Rises’ Batman movie, before making his way up the stairs and shooting people at random, according to reports.

The man also apparently set off a smoke or tear gas bomb, killing at least 14 people and injuring dozens more.

Previous Ex-campaign treasurer for Hendon among 7 charged in FBI sting
Next Ice-T Defends Gun Rights: “The Last Form Of Defense Against Tyranny”