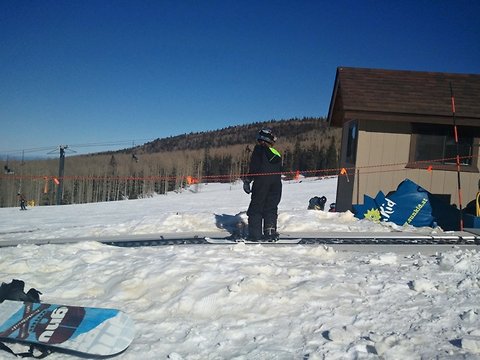 Rudy Preston Yellowish traces (look closely) at Arizona Snowbowl, where snow made from wastewater was deployed for the first time over the holidays.

After a decade of legal battles, a ski resort in Northern Arizona recently became the first in the world to make artificial snow totally out of sewage effluent. On Dec. 24, Arizona Snowbowl fired up its snow guns for the first time, and to everyone’s surprise, the snow that blasted onto the mountain was yellow.

The discolored snow has sharpened an already fraught conflict.

Snowbowl’s manager, J. R. Murray, said the problem was caused by rusty residue in the new snow-making equipment that carries the wastewater from neighboring Flagstaff, where it is piped directly from the town’s sewage treatment plant.

But Taylor McKinnon of the Center for Biological Diversity, a conservation group, says something seems fishy. “I question whether that explanation is based on tests of the water or conjecture,” he said.  ”Something’s awry, and the onus is on the Forest Service and ADEQ to protect the public and determine the cause.” (ADEQ is the acronym for the Arizona Department of Environmental Quality.)