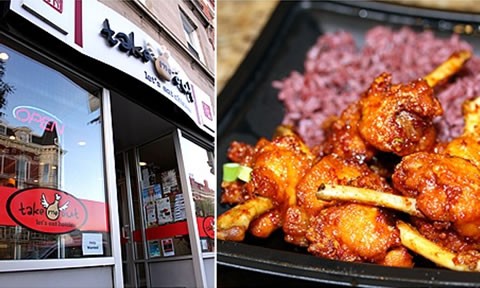 Super-Fan Starts Kickstarter page to bring them to Naperville.

Chicago, June 3, 2015 – Over 20 years ago, the Great Seas restaurant opened on Lawrence Avenue in the Albany Park neighborhood of Chicago. It sold many popular Korean and Chinese dishes, but none more infamous than their original-recipe spicy chicken wings. These spicy chicken wings quickly began to steal the show, proving to be so popular that the sauce that they were coated in became a product in itself and was sold in bottles to eager customers. A sister restaurant, Take Me Out, eventually opened to serve the Pilsen neighborhood of Chicago, focusing on only a few menu items, namely the chicken wings, as it was clear that they were developing a ‘cult’ following.

Nowadays, these wings are so famous that at New Year, the streets are full of people carrying boxes of them home for their celebrations. Some travel from one side of Chicago to another just to pick them up. However, perhaps the biggest testament to their success is the fact that a Kickstarter campaign to bring them to the suburb of Naperville has started up. This campaign was created by wings super-fan Chris Yoon, who has been eating at Great Seas since he was a child. It has the backing of the people of Chicago, as the wings are regarded as a source of culinary pride for the city. The general consensus is that they should be available everywhere.

It isn’t often that an eatery is beloved to the extent that there are campaigns to replicate its menu items. Great Seas’ notorious chicken wings are proof that viral status can be achieved without the help of the internet. Chicago clearly can’t get enough of them.

You can support Chris Yoon’s Kickstarter campaign by going to https://www.kickstarter.com/projects/1746994429/chicken-wing-restaurant