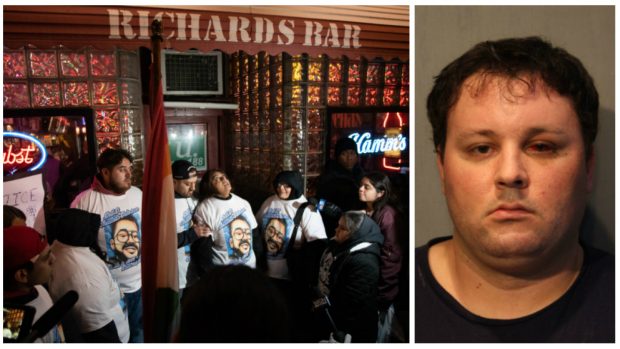 Kenny Paterimos and Thomas Tansey were witnessed fighting outside Richard’s Bar before the stabbing, prosecutors said.

COOK COUNTY CRIMINAL COURTHOUSE — The Marine veteran charged with murdering a Pilsen barista fought with the victim inside and outside Richard’s Bar in River West before slashing him to death, prosecutors alleged in court Thursday.

And while the suspect, Tom Tansey, 30, has claimed self-defense, a Cook County judge said the wounds in Kenny Paterimos’ back don’t suggest mutual combat.

Judge Charles Beach then ordered Tansey held without bail during the hearing.

Tansey told police after being arrested on the scene he stabbed Paterimos in self-defense. But Beach noted most of Paterimos’ stab wounds were to his back. Beach also said Tansey has a history of violence.

There is no surveillance video showing the stabbing, officials said.

“My family is just thankful that he wasn’t given a bond,” Kenny’s brother, Anthony Paterimos, said after the hearing. “Now we’re leaving this case in God’s hands as well as the prosecutors’. I’m glad he’s off the streets. It gives some peace of mind that he won’t be able to do this to someone else or harass anybody in my family.”

During Thursday’s hearing at the Cook County Criminal Courthouse, prosecutors painted a picture of a bar fight that spilled outside, resulting in a confused series of events and the eventual death of Paterimos, who suffered a slashed artery.

Prosecutors said Tansey, who was “severely intoxicated,” was at the bar when he and Paterimos got into a fight, fell to the floor and had to be separated. Witnesses were unclear on who started the fight, prosecutors said.

Afterward, witnesses said they heard Tansey say he would rip out Paterimos’ nose ring, and Tansey was escorted out of the bar, prosecutors said.

Paterimos stayed inside Richard’s for a short time, but he was angry and friends were trying to calm him down, prosecutors said. One witness told prosecutors he heard Paterimos say he was going to go outside and beat up Tansey.

After that, Paterimos went outside and was followed by one of his friends.

Two people working at a nearby bar were outside and saw Paterimos and Tansey argue and then get into a fistfight, prosecutors said. One witness told prosecutors he saw Paterimos standing over Tansey, punching him, while Tansey held his hands over his face.

Paterimos’ friend pulled him away from Tansey, prosecutors said, and Paterimos struggled with his friend and they fell to the ground.

Paterimos then got up and ran while Tansey chased him, prosecutors said. One witness saw Paterimos holding his bleeding arm as he ran past and back into Richard’s Bar. Tansey stayed outside.

Two witnesses, including Paterimos’ brother, left the bar to see Tansey holding a knife and walking away, prosecutors said.

Paterimos was taken to Stroger Hospital and pronounced dead. He was stabbed in the back of his head, his right ear, the middle of his back, his right clavicle and his right arm — which severed an artery and turned out to be the fatal wound.

The friend of Paterimos who had come outside with him was also stabbed. He has no memory of what happened outside the bar, prosecutors said.