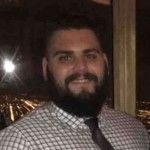 An elementary school teacher from Naperville stands accused of running down two young sisters with his vehicle in a drunken, hit and run traffic crash in Chicago, police said.

Matthew B. Lucchini, 26, of the 2300 block of Remington Drive on Naperville’s far southeast side, was charged with two counts of driving under the influence of alcohol, one count of leaving the scene of an accident involving injury and three traffic violations, including negligent driving, according to a release from the Chicago Police Department’s office of news affairs.