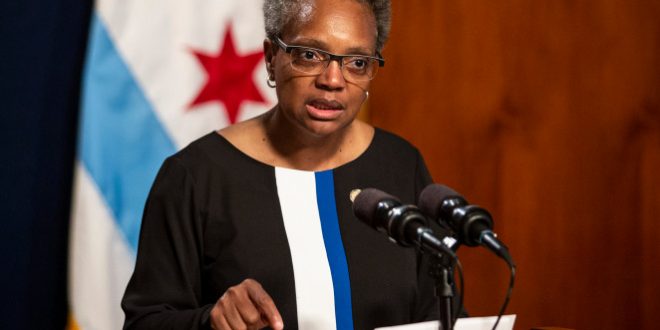 Last month, President Trump visited my hometown of Chicago to speak at the International Association of Chiefs of Police Conference. Sadly, the city’s top cop, Superintendent Eddie Johnson, skipped his event that day in protest. But he, and Chicago’s mayor, Lori Lightfoot, should have attended to hear some hard truths. Trump has been criticizing Chicago leadership since 2016 for allowing the violence to become one of the worst in the world, earning the title in 2015 as America’s mass-shooting capital, and he continued to highlight Chicago’s problems during the conference.

In response, Chicago’s mayor suggested Trump focus on his issues in DC, and the liberal press touted the decrease in violence in Chicago in some apparent attempt to prove how out of touch Trump is.

In my reporting for Fox News, the people I have spoken with feel so under siege by the gun violence that this tiny drop doesn’t even register to them, and any talk from a politician who mentions the reduction in murders is a smack in their face because going on their front porch could be a death sentence.

My friend Wendy Hill has a similar story. Her brother Emell was 23 and had no association with the gangs when, one Sunday this past October, he was followed home from a gas station and shot seven times in cold blood on his front porch while he attempted to unlock his door, The Chicago Sun-Times reported.

He lay breathless while his sister screamed and knocked on neighbors’ doors, crying for help. Emell died before he made it to the hospital.

My own younger brother has also been a victim of the violence in Chicago. During Memorial Day weekend in 2017, he and a couple of friends were parked in a car on the South Side when two men approached, pulled out automatic pistols and started firing. Bullets ripped through the car. Shattered windows. Punctured steel. And, then skin. Later, the police would count 25 shell casings. My brother survived, but I could just as easily be discussing him in the past tense.

His best friend died in my brother’s arms that night; two more victims of the violence in Chicago.

There is another way.

First, Chicagoans — of all colors and tax brackets — most come together. Democrats have run the city (and state) for 50-plus years and consider 424 murders an “improvement.”

Blindly following the party, any party, is clearly not working. I’ll repeat it: Black lives don’t matter to these people, black votes do.

Until my fellow Chicagoans accept this hard truth, we can expect to remain one of the most violent cities on earth. And while I realize this issue is far beyond politics, it is clear the liberal solutions we continue to see offered by local leaders have failed.

Rahm Emanuel, Obama’s former chief of staff, was mayor of Chicago from 2011 to 2019 and was nothing more than a failure.

He’d offered only promises, higher taxes and “sanctuary” for everyone but the — mostly — African Americans bleeding in our streets. He and the local Democratic leadership sought to decrease gun violence only via stronger gun laws, catapulting Illinois’ gun regulations to among the very strictest in the nation. (Someone should have warned Emanuel that criminals don’t obey the law.)

Second, let’s end the narrative of “they’re not from Chicago” or “they’re a Republican,” so their thoughts don’t matter.

The leadership of Chicago should reach out to the “other side,” to any side — with an idea or funding to help.

President Obama never truly extended a hand to Chicago (his “adopted hometown”) to stop the violence. He had a unique opportunity to raise the issue of Chicago violence as a national crisis.

We’ve now got a leader in Washington who’s willing to work with Chicago to fully fund programs aimed at positive alternatives for at-risk individuals, using interventions shown to have long-term impacts on violent behavior. But “Trump’s not welcome in Chicago,” according to some Illinois politicians. If the president is serious about helping the people in Chicago, and I believe he is, we can’t turn any help away.

All too often, policy issues and decisions are being made with decades-old data and assumptions.

Of the top 30 causes of death in the United States, gun violence is the least researched.

According to a recent study published in the Journal of the American Medical Association, gun violence should have received almost $1.5 billion in federal research money between 2004 and 2015 and instead received a total of only $22 million.

The lack of research condemns policymakers to remain ignorant about many aspects of gun violence, including the most effective ways to reduce violence. There are thousands of studies waiting to be performed, and more than 100 medical organizations have beseeched Congress to restore funding for this research. We must add our voices to that demand.

Chicago is in a national crisis, and one murder is too many.

Posturing and politics must end. There’s been enough bloodshed. And the world is watching.

Gianno Caldwell (@giannocaldwell) is the author of “Taken for Granted: How Conservatism Can Win Back the Americans That Liberalism Failed” (Crown Forum), out Tuesday.

Post Views: 291
Previous A Queen’s Boutique Announces Casting Call for Fashion Show in Rockford on Oct 13
Next Chicago’s witches: A craving for magic and meaning drives millennials to spells, potions and rituals