Symptoms may appear up to a month before attack 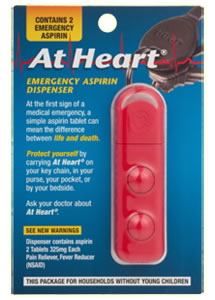 Most of the heart attacks occur when someone is away from home, and most heart attack deaths occur before the patient gets to the hospital. Keeping an At Heart® emergency aspirin dispenser with you can protect you and your loved ones. For more information on heart attack prevention please visit:

Previous Single Ladies in the mood for love?
Next Are You Ready For St. Patrick’s Day? GourmetBasketsOnline.com Can Help