CHICAGO – Two days before Christmas, a melee erupted with gunfire at Oakbrook Center in suburban Oakbrook creating pandemonium as holiday shoppers were ushered for cover and the mall was placed on lockdown. Four people were injured by gunfire including one of the combatants.

One month earlier, a mob stormed a high-end store at the mall and escaped with $120,000 in merchandise. The looting was a reminder of the turn of events that occurred in the Chicago area and across the nation in May 2020 shortly after George Floyd, a Minneapolis man, died after a white police officer planted his knee on Floyd’s throat for over nine minutes. One of the stores that received heavy damage during the social unrest was Macy’s on North Michigan Avenue. In January 2021, the Magnificent Mile store permanently closed.

To reduce losses due to thefts, Macy’s launched new measures, including using radio-frequency identification technology. But Raul Montes, Jr., who was employed as an assets protection detective in Oakbrook to prevent thefts, said store managers in Oakbrook went overboard by profiling Black and Hispanic shoppers. The pressure was so intense to track shoppers of color that he complained about the practice and that led to him separating from the company two months after he was hired.

On Thursday, March 17, 2022, at 11:45 AM, Montes, joined by community activists, will hold a press conference outside the Macy’s, which is located at 1 Oakbrook Center in Oak Brook. During the press event, Montes will provide proof of racial profiling.

“They have codes – 98 for Blacks and 97 for Hispanics,” said Montes, who stopped working at Macy’s last week. “The minute Black people walked into the store all eyes were on them. The store has over 100 cameras, and they even follow them to the dressing room.”

Montes, who lives in Chicago, said it was the hardest job he ever had. He was stationed with six others in a computer room monitoring cameras until he was dispatched to the floor of the store to confront shoppers. He was uncomfortable approaching shoppers who paid for their items.

“I could not last there any longer,” Montes said. “One day I got sick. When I walked into the store, I felt anxiety. I felt very uncomfortable working there. I was in a hostile environment.”

Montes said he reported the racial profiling to his senior managers, and they never addressed the situation.

He hopes public pressure will force Macy’s to change its training practices, which includes videos of actors stealing. Ironically, he said, 90 percent of the actors were African American.

and Supporters of Montes.

WHY: To highlight racial profiling of Black and Hispanic shoppers at the department

About Tio Hardiman: Dubbed “Mr. Ceasefire”, Tio Hardiman created the award-winning CeaseFire initiative in 2004, and has been dedicated to combating problems of violence and corruption in the nation’s third largest city. Hardiman is also the creator of the critically acclaimed documentary, The Interrupters (2011), and decided to produce a second film called The Chicago Way in 2017 as pushback against Chicago political corruption, police brutality, and the continued gun violence. Using his platform, Hardiman launched himself in the 2018 Gubernatorial race against Democrat powerhouses like JB Pritzker and Chris Kennedy. He ran his campaign on the principles of combating violence, racism, and the top-down corruption that has been taking place for decades in Illinois. On April 26, 2020, Mr. Hardiman launched the “Tio Mr. Ceasefire Hardiman Show on WVON 1690 AM in Chicago, which airs on Sundays between 6 AM and 7 AM. For additional information on Tio Hardiman and Violence Interrupters, visit jerry. 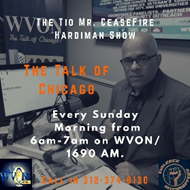