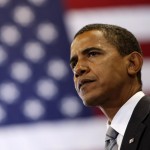 Only days after clearing Congress, US President Barack Obama signed his name to H.R. 347 on Thursday, officially making it a federal offense to cause a disturbance at certain political events — essentially criminalizing protest in the States.

RT broke the news last month that H.R. 347, the Federal Restricted Buildings and Grounds Improvement Act of 2011, had overwhelmingly passed the US House of Representatives after only three lawmakers voted against it. On Thursday this week, President Obama inked his name to the legislation and authorized the government to start enforcing a law that has many Americans concerned over how the bill could bury the rights to assemble and protest as guaranteed in the US Constitution.

Under H.R. 347, which has more commonly been labeled the Trespass Bill by Congress, knowingly entering a restricted area that is under the jurisdiction of Secret Service protection can garner an arrest. The law is actually only a slight change to earlier legislation that made it an offense to knowingly and willfully commit such a crime. Under the Trespass Bill’s latest language chance, however, someone could end up in law enforcement custody for entering an area that they don’t realize is Secret Service protected and “engages in disorderly or disruptive conduct” or “impede[s] or disrupt[s] the orderly conduct of Government business or official functions.”