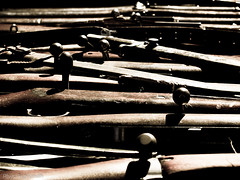 12 hours ago • The Associated Press

CHICAGO — A gun group is using its payout from Chicago’s annual gun buy-back event to send children to a shooting camp — a move that has been criticized by the city’s police department.

Approximately 60 guns and several BB guns were given to police by the Champaign-based gun group Guns Save Life during the gun buy-back last week, the Chicago Sun-Times reported.

The gun-group received $6,240 in gifts cards in exchange for the guns.

“This was rusty, non-firing junk that we turned in,” said John Boch, president of the group. “We are redirecting funds from people who would work against the private ownership of firearms to help introduce the next generation to shooting safely and responsibly.”