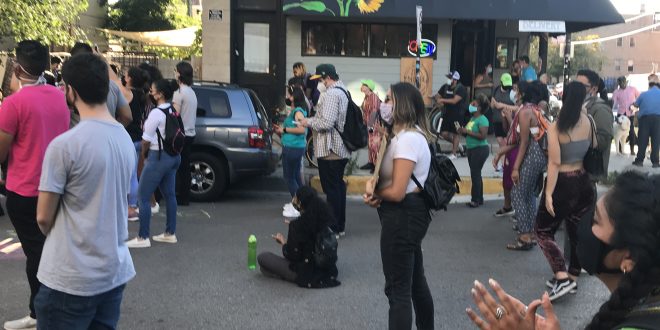 Aside from the near-daily Chicago protests that are becoming news headlines across the nation, a lesser-known protest has been raging-on. All across Chicago, many neighborhoods have been fighting back against a common but provoking menace. This menace is known as an SRO (School Resource Officer) and can be found within many of the low-income schools across the state. Until recently, many teachers, parents, and students took on an issue this is now gaining incredible traction. These are now known as the Pilsen neighborhood Chicago protest parties that are spreading from street to street.

Pilsen is one of a handful of low-income districts within the Lower West Side in Chicago that is plagued with crime and poverty. Despite this, the historical background of Pilsen has never forgotten its’ roots of a lively and energetic Hispanic culture. Since the 1960s, the Latino population began to emerge and grow into a Mexican-American hub by the 1980s. After this decade, Pilsen was further defined with a smaller but growing migration of both black and Asian families.

A criminal element on the rise in Pilsen

Despite the popular expression that Pilsen is the Heart of Chicago, it is also a city where crime is constant. It was once a thriving immigrant city around the turn of the century, Pilsen has a steady working class that lived with often wealthy immigrants. Many of these new transplants were from German, Austrian and Polish backgrounds. But as the decline of the 90s marked an all-time low in the factory and manual labor, crime was on the rise.

As with every town that begins to experience financial change, the element of survival kicks-in and illegal activities thrive. It wasn’t uncommon that hi-end drugs such as cocaine and heroin were sold throughout the Lower West Side. By the early 2000s, it became mandatory that the city needed to step in to help stem the level of drug-related violence. It was also at this time that handguns were a serious problem in local city schools and neighborhoods.

This led to new development with the Chicago Public School district and the Chicago Police Department began to collaborate. They devised a new type of police presence that would be added to public schools to prevent violence. It reduced the threat of student on student violence as drug dealers invaded public schools like a virus. The never-ending threat resulted in the creation of School Resource Officers and the contract was awarded to the Chicago Police Department.

Each year this contract was renewed and grew larger and larger in the budget. But as the first decade during the early 2000s was over, a new problem began to arise. By 2010, a different generation was beginning to see a different side of the SRO’s role in public schools. With very little gun control and crime to constitute a major city contract, the CPD devised a new method of policing public schools. It used bullying and scare tactics to provoke criminal activity. Often this justified the reasoning for CPD officers to gain an income by policing public schools instead of leading a career of fighting city crime.

This has further invoked a response from the members of the Pilsen community that have brought back memories of generational oppression. But then again, this is all a very new spin on an age-old immigrant prejudice. As every migrant culture often has, Blacks and Hispanics are more often blamed for drugs and crime. These cultures are a scapegoat for reasons that are now being hotly debated.

Not until last summer, Mayor Lori Lightfoot was asked publicly if she would consider canceling the contract between the CPD and CPS. Her immediate response was expected resounding with a bolstering stance to uphold the security of the public schools. This year’s most recent contract is worth a whopping $33 million. However, this had sparked a public response that went city-wide.

It further led to a very obvious public statement from the CPS Chief of Safety and Security- Jadine Chou. This statement included that local schools now had the ability and authority to vote whether they wanted SROs provided at their school. But the catch was that this would not be effective until the next school year. Well now that time has come and the powder keg has already been lit.

In a mild public protest this month, amid one of the most unsettling global pandemics we are experiencing, Pilsen teachers, parents, and students stood strong. In a share of support, the Chicago Teachers Union was also present to urge Pilsen residents to vote out the CPD from their schools. The Pilsen neighborhood Chicago protest parties have already made local votes make a difference! One such school in Pilsen has already voted-out the police in a 7:1 vote!

The Benito Juarez Community Academy on July 15th, and was previously followed by Northside College Prep’s council; who was the first in Chicago to take a stance. Now the momentum has reached deeper in Pilsen neighborhoods that are holding peaceful protests to raise further awareness. Using a platform of music and cultural diversity, these protests are more educational than anything else.

While the goal is to keep police out of Pilsen public schools, there is hope that the city will use that spending budget for more education funding. There is also a great need for public assisted mental health facilities in their neighborhood. And as some of this protest is focused on a continued genocide of the Latino culture in America, it’s mostly grandstanding. What it’s doing is the same awareness that the Black Lives Matter movement has done for Generation Z. As this simply enables and empowers the low-income Hispanic community within Pilsen. 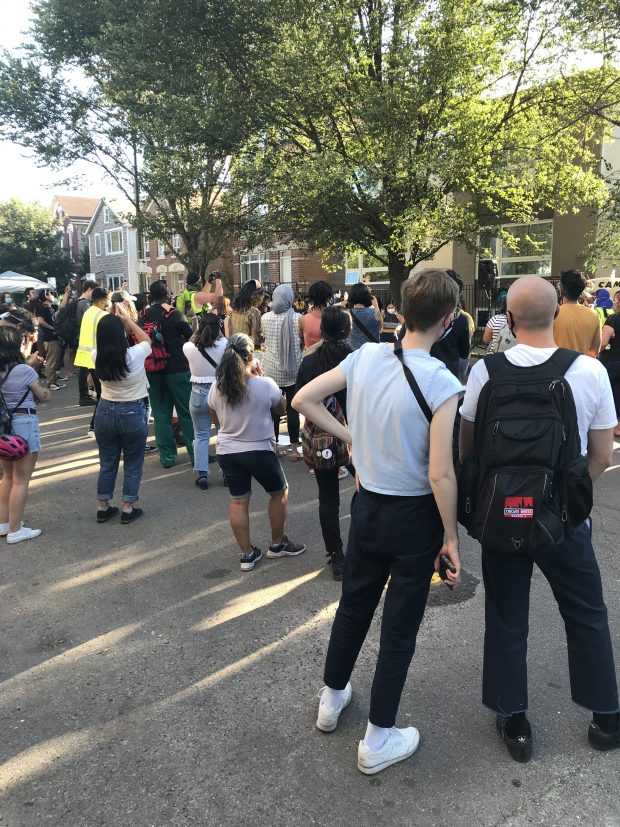 A new focus on education and community in Pilsen

As the protests continue towards a larger step in community recovery, the community is urged to unite. Symbolizing itself as the true Heart of Chicago, Pilsen is on a slow road back to their family-based roots. As many of the protests for city-wide freedom have failed to capture, Pilsen might just be an example that other cities should follow. And oddly enough even the outspoken AOC (Alexandria Ocasio- Cortez) has remained suspiciously silent about this issue…

As we enter a new school year, the schools that do have contracts with the CPD will no doubt feel a backlash of public outcry. And as societies no longer live in the post-80s and 90s drug import war on drugs, the scars are beginning to show. Many students who have grown up being bullied and harassed by the CPD will never be forgotten easily. And unfortunately, these incidents were part of a dying program that Chicago is guilty of continuing for too long.

Now the actions that were married together to eliminate violence between students have shifted into police battery against low-income students. It’s a shame that will follow the CPD but will no doubt be short-lived as they focus the blame elsewhere. That won’t remove the generational trauma that still haunts many students and teachers today. Only time will tell if Pilsen will have the means to provide public services to repair the mental damage that’s been done.

Yet this is all part of the educational value that these peaceful protests are all about. It mixes music and culture, personal stories that aren’t polished whatsoever. If there was a grassroots protest plan for 2020, this is what puts Pilsen on the map. As many will find with any school function, these protests provide support for the families that have been affected. They sympathize with the trauma and rally support to make an important vote possible. And it also symbolizes freedom against oppression and the end to all police brutality. This time it’s more personal because it has hit a generation emotionally rather than just physically.

Pilsen residents simply want a society that supports youth and not the policing and disenfranchising of young black and brown people. It comes at a time when social distancing is now a reverse of fortune for those who are sharing this story. Now that social media is giving everyone the ability to share their opinion, Pilsen residents are taking back their rights using education. Using music and family values, the Pilsen neighborhood Chicago protest parties are gaining appeal and a wide audience.

And though it may seem that Chicago is spending more on being a police state than for providing public services, they will also be blamed for their ongoing participation. Yet for one community that was once branded a dangerous place to be in Chicago, Pilsen residents are fighting for their lives. Not from crime in their schools, but for the peace of mind to change a future generation that may have forward-thinking.

We encourage the education of our young minds no matter what, and just like Chicago’s public schools- they’re now proving they are houses of education. And in an age of questions about our future might be shaped through the current global pandemic, education is the key. Please feel free to help share this article with others. To spread the word how public schools can make a difference, one school at a time.

Post Views: 269
Previous Aftermath of one area looted in Chicago last night
Next This Labor Day, let’s honor the workers who are beyond essential