The Future of Needle Exchange Programs in Chicago Still Unknown

March 20, 2017 Chicago Comments Off on The Future of Needle Exchange Programs in Chicago Still Unknown 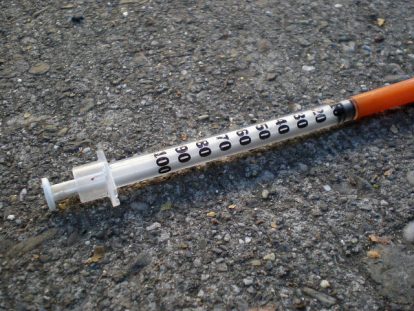 Statistics show that heroin use is on the rise in the United States, with the Substance Abuse and Mental Health Services Administration (SAMHSA) indicating that heroin use has spiked by almost doubled between the years 2007 and 2012. This has also resulted in increases in HIV and Hepatitis C infections among intravenous drug users, an issue which is considered a crisis owing to the major consequences for public health. One of the most efficient ways to reduce infection rates, are needle exchange programs, which involves exchanging giving users new needles in exchange for new ones. In Needle Exchange Centers, information is also commonly given regarding available drug treatment options and often, free HIV testing is conducted.

Illinois has needle exchange programs in a small number of cities, including Belleville, Champaign, Chicago, Kankakee and Springfield. Some of the benefits of these programs include reducing the risk of contaminated needles being shared and preventing law enforcement officers from being accidentally jabbed with a used needle. One study carried out in San Diego showed that almost 30 per cent of police offers had been stuck by a needle at some point in their careers, with over 27 per cent of said officers being jabbed more than once. Another study carried out in Connecticut, meanwhile, showed that needle stick injuries were reduced by 67 per cent after needle exchange programs were established.

In centers where HIV testing is offered for free, a great service is provided to patients and to the community as a whole, since those who test positive are able to reduce the infection rate by taking specific measures and commencing antiretroviral treatment. In many states, needle exchange centers encourage beneficiaries of clean needles, to return their needles as soon as they have been used. Research in Baltimore has shown that frequent exchange of old for new needles, results in an almost 50 per cent drop in the number of improperly discarded syringes. This seriously reduces the rate of used needles being reused, and of accidental needle injuries. Far from increasing drug abuse, these programs simply improve safety for the police and the public.

The future of these centers and the possibility of new needle exchange programs being established in Chicago and other states, is as yet unknown. HIV advocates have already voiced their concern that the Trump government may impede the continuance of these programs, given the opposition voiced by Vice-President, Mike Pence, when he was governor of Indiana during one of the state’s biggest HIV outbreaks. Around 200 people in rural Scott County had become infected with HIV primarily as a result of sharing used needles. Over 20 new cases emerged each week as a result of this practice. Health experts from across the U.S. recommended that the state immediately left its ban on needle exchange programs. Pence initially resisted, calling for prayer before permitting what he termed “limited and accountable” exchange programs. “I am opposed to needle exchange as anti-drug policy,” sated Pence in 2015, before lifting the ban on needle exchange programs in Scott County. Pence eventually signed legislation which would lift the ban statewise, though the law required counties with an increase in HIV or Hepatitis C rates, to declare a public health emergency then request state approval to set up needle exchange programs for up to one year.

The Trump government has expressed no firm view regarding needle exchange programs, though it is expected that given their documented benefits, they will continue to exist in Illinois and other states. America has nothing to gain from removing these programs, given the high cost of treating HIV and Hepatitis C. Every year, the U.S. government spends billions of dollars to fight AIDS in America and globally. Prevention is better than cure, not only for patients but for public health as a whole.

Post Views: 279
Previous Enter Canada with a DUI: what you need to know before you book your trip
Next The Real Consequences of Drunk Driving