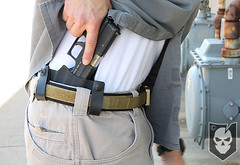 The state of Illinois would have to allow ordinary citizens to carry weapons under a federal appeals court ruling issued today, but the judges also gave lawmakers 180 days to put their own version of the law in place.

In a 2-1 decision that is a major victory for the National Rifle Association, the U.S. Seventh Circuit Court of Appeals said the state’s ban on carrying a weapon in public is unconstitutional.

“We are disinclined to engage in another round of historical analysis to determine whether eighteenth-century America understood the Second Amendment to include a right to bear guns outside the home. The Supreme Court has decided that the amendment confers a right to bear arms for self-defense, which is as important outside the home as inside,” the judges ruled.

Previous NSA Whistleblower: Everyone in US under virtual surveillance, all info stored, no matter the post
Next BackUp Generators By Generac