Obama: ‘Chicago Is an Example of What Makes This Country Great’

August 24, 2012 Chicago, Illinois Comments Off on Obama: ‘Chicago Is an Example of What Makes This Country Great’ 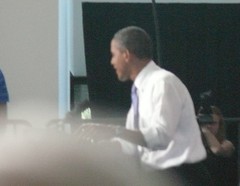 In campaign remarks yesterday at the Bridgeport Art Center in Chicago, Illinois, President Barack Obama praised his adopted city, where he lived before becoming president of the United States. “Chicago is an example of what makes this country great,” Obama said. His audience applauded.

President Obama’s proof for his assertion? The donors in the room, who had given to his reelection campaign. “Witness this room,” Obama said. And he elaborated: “[W]e’ve got everything we need to make things work here in America. We still have the best workers in the world. (Applause.) We’ve still got the best entrepreneurs in the world. We’ve got the best colleges, the best universities, the best scientists, the best researchers. We’re a young nation, and we’ve got the greatest diversity of talent and ingenuity from every corner of the globe.”

But what President Obama did not address is Chicago’s homicide rate, one of the highest in the nation.

Obama: ‘Chicago Is an Example of What Makes This Country Great’

Selecting the Right Walk in Bathtub

Walk in Bathtubs in Condos, to be or not to be?