August 24, 2012 Chicago Comments Off on 19 people shot in overnight shootings across Chicago 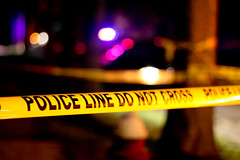 Nineteen people were shot across the South and West sides from Thursday evening through early Friday morning — 13 of them wounded over a 30-minute period, authorities say.

Then two men were wounded in the Ida B. Wells / Darrow Homes complex at about 9:25 p.m., police said. The men, 27 and 33, were shot in the 600 block of East 37th Street and taken to the University of Chicago Hospitals, police said. The younger man was shot in the head and the other in the right arm, Gaines said.
19 people shot in overnight shootings across Chicago

Previous Chicago Police officer admits taking drug money in FBI sting
Next Obama: ‘Chicago Is an Example of What Makes This Country Great’