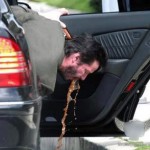 CHICAGO (CBS) – It’s been six years since Chicago cab drivers have had a fare increase and cabbies say it’s about time they had another one.

As CBS 2’s Vince Gerasole reports, a group of 1,500 cab drivers have signed off on a proposal to raise fares by 22 percent, charge credit card users a $1.50 convenience fee and a $75 fee for drunken passengers who vomit in their vehicles.

Previous Now, 91 congressmen have ‘no confidence’ in Holder or believe he should quit
Next Matt Damon Blasts Obama: “One-Term President With Balls” Would Be Better